Meru was one of the amazing murthis worshipped during Mahashivaratri. Read the satsang given by one of the Swamis.

“Meru came to Skanda Vale many years ago and was brought by a priest who had it specially made; but for the wrong reason. This person wanted to use a very powerful aspect of the Divine Mother to harness the energy and power of Skanda Vale for his own reasons. But Guru knew this. He said, “when this person comes with this Sri Yantra, do an abishekum in the back of the temple. We never normally do mahabishekums in the back of the Murugan temple. Guru said “you do the puja, keep the gates of the sanctuary closed, and I will do the puja through you. Use liquid kumkum“. The liquid kumkum completely nullifies any negative energy that’s gone into something. When we do mahabishekum to Divine Mother Kali we offer liquid kumkum over her. The same with Narasimha. And so we did this mahabishekum in the back of the temple. It was amazing because you could tell it was Guru doing the puja and he was going through the motions. This priest was really confused. You could see his mind was all over the place, and he knew he’d been rumbled. He knew that Guru knew what he was up to. There was an immense power there. After the puja Guru said “the whole intention that was behind this Murthi has been completely transformed. It’s like a clean slate. Put it in front of Lord Shiva’s niche in the sanctuary”. It stayed there for many years.

When we came to consecrate this temple (Somaskanda), we were very inspired to bring this very powerful, almost formless aspect of the Divine Mother here, because this is a Shiva Shakti temple. You don’t normally see Sri Yantra in the three-dimensional form, it’s normally a flat square yantra. The Sri Yantra is like the mother of all yantras. Within Sri Yantra are all the different aspects of the Divine Mother. There is also Shiva merging with Shakti. If you look at a two-dimensional version, you can see lots of intersecting triangles. Half of it is Shakti going up to meet Shiva. It’s what is represented in a human being. Mother is manifest as Kundalini Devi at the base of your spine, and Lord Shiva sits in the thousand petal lotus (on the top of your head). When the Divine Mother is activated, kundalini activates and climbs up your spine and merges with Shiva.

Within the Sri Yantra are all the aspects of Devi plus Shiva, all merged together in one, and right at the top there is this bindu. It represents merging with the absolute. Sri Vidyia is a whole science in itself. Many people and tantric yogis spend years being initiated and learning the different stages of Sri Vidya. Different stages represent different areas of the Sri Yantra. When we worship the Sri Yantra, take your mind to all the facets of the Divine Mother. Not just the aspects of Mother, but also her weaponry, her powers.

We started today with a havan, and you saw someone indicating to me where to offer the different ingredients around the havan. The havan is very similar to the Sri Yantra. There are three different layers of the havan kund. You are worshipping the elements, you are worshipping agni (fire), vayu (wind), water. You are worshipping the different aspects of the Divine and you are worshipping the weaponry of those aspects of the Divine. And then you are invoking agni. Agni then carries that worship to the Lord. It’s like here on the Sri Yantra: each corner, each point represents a different attribute of the manifestation of the Divine. It’s like a whole manifest universe in this geometric form, but also the unmanifest. Shiva and Shakti. Shiva is purusha, Shakti is parakruti. This journey that we are going on in life is involved in maya. Maya is an aspect of the Divine Mother. It’s only through living in maya that we are able to pay our karma. Through experience we then are able to free ourselves from everything that binds us and merge with the formless Shiva, the absolute prurusha.

Inside the murthi is a shaligram. A shaligram is like a lingam. This particular shaligram was worshipped in the Sri Ranganata temple at Skanda Vale for about ten years. From when the Sri Ranganata temple was consecrated to when this temple here was consecrated. It used to live in the arm of Lord Vishnu and we did mahabishekum to it every Tuesday and Friday. You used to be able to take the Sri Yantra off the base and it was possible to look inside. That is not possible any more, it’s all sealed now. We put the shaligram in there. That shaligram is completely surrounded by the kumkum from Mother’s tongue in Skanda Vale and vibuthi that has been placed on the feet of Lord Shiva from the top of Arunachala.

Arunachala is a mountain in Tamil Nadu. Right on top of the mountain are the feet of Shiva and the feet of Parvati. We went there on pilgrimage and we did a special mahabishekum in the middle of the night to two Shiva lingams. The vibuthi that was offered in that puja surrounds this shaligram. Not only have you got the outer manifestation of Shiva and Shakti, you’ve also got the inner manifestation of Shiva and Shakti with that vibuthi and kumkum. Vibuthi from Shiva, kumkum from Shakti joining the Murthi together as Maha Vishnu.” 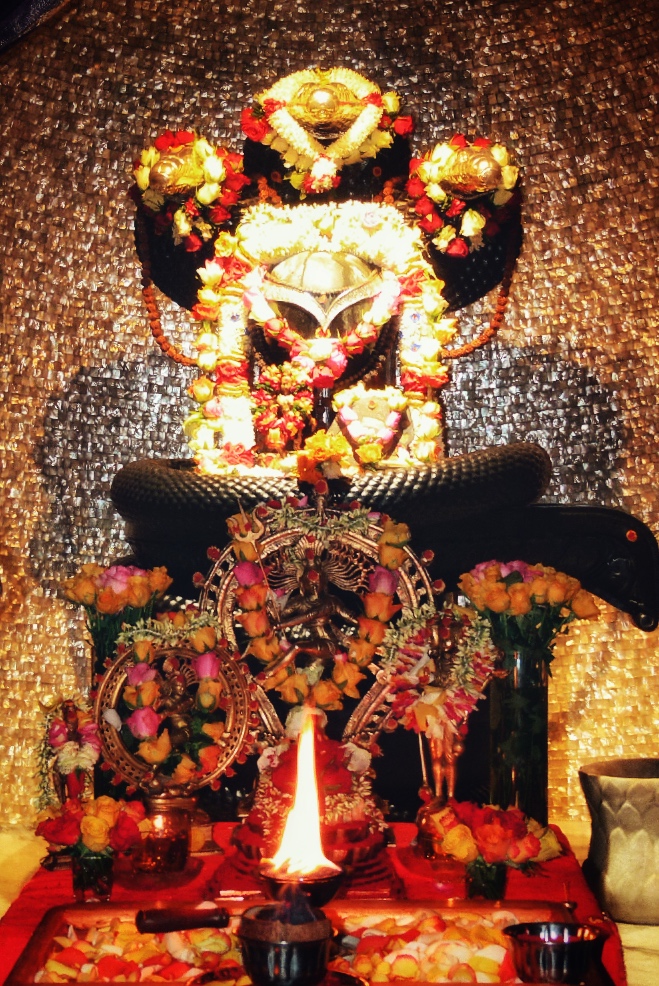 I am the spring

Protect what you value