You experience much when you go on pilgrimage. Read the stories from two pilgrims who walked up to the ashram from the village of Fideris.

I’ve been lucky enough to visit the Himalayas a number of times, and there are a few things that almost all the pilgrimage sites there have in common: they are very difficult to access, the temples are often very small, and the locations are inhospitable surrounded by stunning scenery, exposed to the elements and very high energy. Although Somaskanda Ashram is in the Swiss Alps lying at an altitude much less than in the Himalayas (1800 m), a pilgrimage here in winter is definitely comparable to a pilgrimage in the Himalayas.

The access road up to Somaskanda Ashram has been officially closed now for over a week and the small ski resort at the top of the mountain is not operating this winter which means that the transport that they usually offer is no longer available. The only ways to ascend are by foot or to wait for the next official bus which wouldn’t be driving up for another week. My friend and I have been keen to go up for a while but bad weather had put us off. Now the forecast was stable and the fresh snow was more compact, there was nothing to stop us. We met at a car park after Fideris village just before the mountain road really starts.

Being women, it took us at least half an hour to decide how many layers of clothes we should already wear and if we should put the rather cumbersome snow shoes on now or later. After much discussion and indecision, we were ready to set off at 8.30am. It’s uphill all the way. At the start we walked up the icy mountain road, but the footpath quickly separated going left through the forest. The incline was immediately quite steep as the footpath cuts across the mountain in a more direct line than the road which meanders and snakes its way up. The loud crunch, crunch, crunch of the snow under our snow shoes became very familiar and was our constant companion throughout the whole walk making any small chit chat inaudible, forcing us to walk almost in silence. This wasn’t such a problem because after a few minutes we were both quite out of breath anyway. My rucksack was far too heavy, filled with my laptop and cables (ready for the online satsang that evening) plus a few offerings and other small necessities a girl needs to sleep over somewhere. After the first 20 minutes I was already trying to supress thoughts of having a very long tea break, but the shade of the mountain was blocking the sun from us and I knew we would just get cold if we sat too long. I was also aware that there were a few more hours of uphill crunching to go.

Further we climbed through the forest. Left and right were animal tracks in the snow and small mountain huts, mostly unoccupied. We created a slow rhythm of walking silently except for the noise of the snow under our shoes, almost like in meditation. Any thoughts of tiredness, hunger, backache etc. were ignored as much as possible and after about one and a half hours we reached a small hut where the first rays of beautiful warming sun were shining. We dragged a plank of wood out from beside the hut and plonked it on top of the snow so that we had a bench to sit on and protect our backsides from the cold and damp. The wonderful feeling of taking the rucksack off and loosening the shoes was only surpassed by the cup of tea and snack. We made sure we had time to do the compulsory WhatsApp updates and call our other friend who had dearly wanted to join us but unfortunately wasn’t able to. The sky was blue, the snow was sparkling and life was good. It wasn’t so great putting the shoes and rucksack back on, but knowing that we had hit the halfway mark after an hour and a half gave us confidence.

We trudged on slowly but steadily. At some point a local elderly ibex, in the form of a human being with touring skis attached to his feet, glided silkily past us uphill. Any thoughts of patting ourselves on the back about not being so unfit quickly dissolved as we huffed and puffed, plonked and crunched, one foot in front of the other slowly and painfully. The stunning sunshine, scenery, clean air, the thought of another cup of tea, and especially the thought of just sitting in front of Somaskanda Murthy drove us on. With about another half an hour of uphill struggle to go, we suddenly heard a familiar ‘Aro Hara’. Looking up we saw a strange angel with dark clothes surrounded by a bright light coming quickly towards us. The angel gently lifted my rucksack off me and smiled cheekily. Swami Govinda had come to help the damsels in distress. When we reached the bottom of the Somaskanda track he also took my friend’s rucksack on his front and stomped at full speed upwards. We were overwhelmed with exhaustion and joy and mastered the last 15 minutes uphill until we saw the temple and Nandhi sitting patiently in the snow, happily guarding Lord Siva, Devi and Skanda inside the temple.

Another angel welcomed us inside with the most amazing cup of homemade chai and yummy biscuits. This angel, Sister Emily, had even prepared beds for us. After a quick change of clothes and rest it was time for pooja. My friend and I were so elated at having made it up successfully and happy to see the temple team that we easily found loads of energy to go into the temple. It was the usual lunchtime abishekam to Somaskanda Murthy with Saraswathi as the aspect of the day. The pooja rocked and we all worshiped the Lord and Devi with such enthusiasm. It felt like the whole temple was filled with amrit and that the Lord, Devi, Skanda and Guru were all there soaking up our love and showering us with blessings.

After pooja we had a well-earned delicious lunch and really enjoyed getting an update from the temple team about how life has been for them recently and sharing stories from our own lives. It just felt like home. We felt looked after, loved and happy. That evening the team hosted an online Satsang and it was so beautiful to listen to them and to see so many familiar faces had joined. The Satsang concluded with a few bhajans and we saw lots of smiling faces swaying and clapping along with the bhajans from the comfort of their own homes.

The night was short but we slept well and the 6am pooja was full of blessings from Lord Skanda. It’s difficult to describe the energy up there at this time of day when the sky is clear, still punctuated by stars and the crescent moon. The snow blankets everything below it, the air is razor sharp, clear and freezing cold, and you can just about see the spectacular mountain panorama at 360° in the pre-dawn light. But it’s the silence which is probably most overwhelming. Just indescribable.

Some time after pooja we came together to eat a breakfast fit for a king. There was a blazing fire heating the small dining room and outside day was breaking and the mountain peaks were being kissed by the first rays of sun. We all ate happily and Brother Simon kept us particularly entertained with his amazing stories and comments that would even put JK Rowling to shame!

Our short pilgrimage had then come to an end. With our rucksacks back on (but a bit lighter) and our feet painfully squeezed back into our winter shoes we strapped our snow shoes on and stomped back down the mountain. We felt happy, fulfilled, but just a little sad that it was already over. 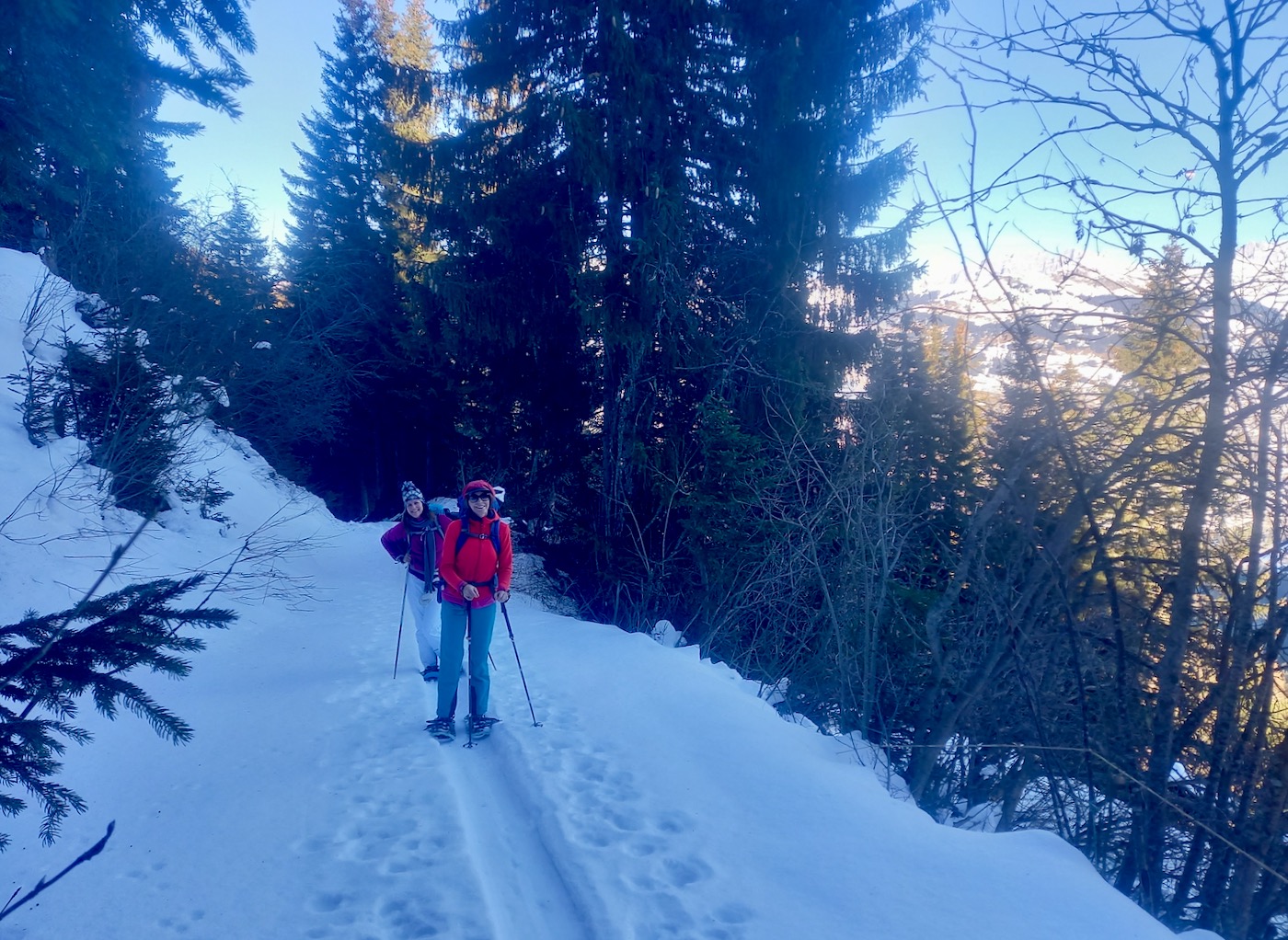 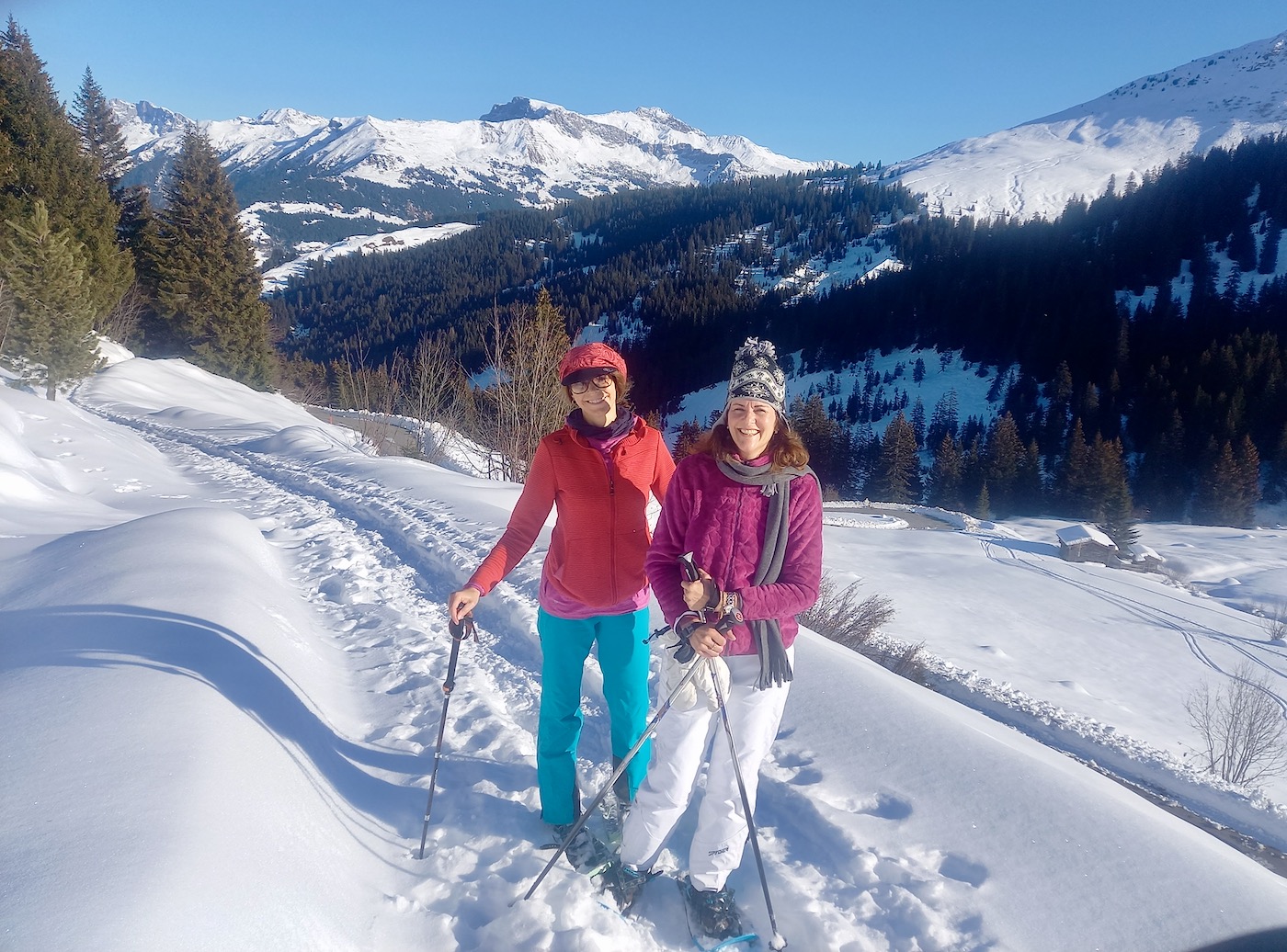 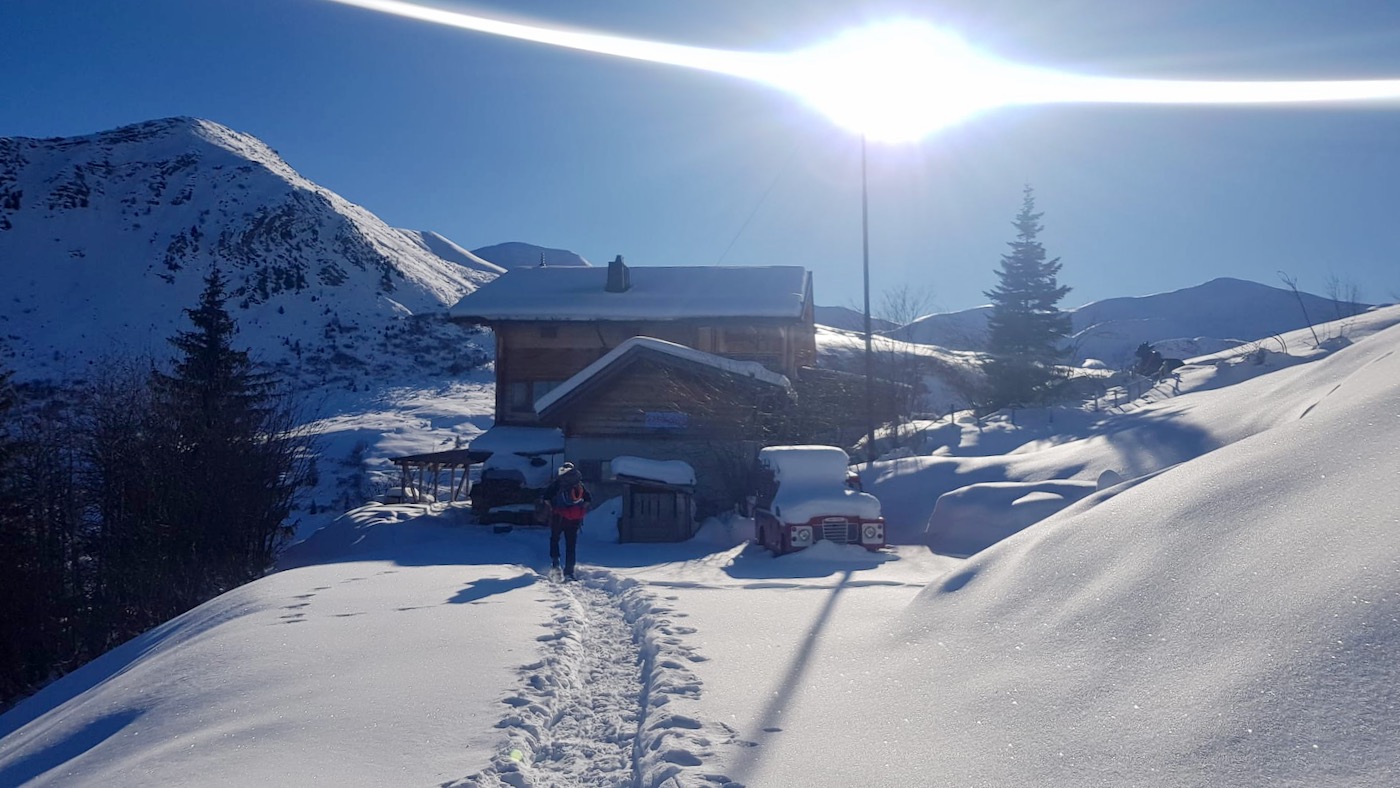 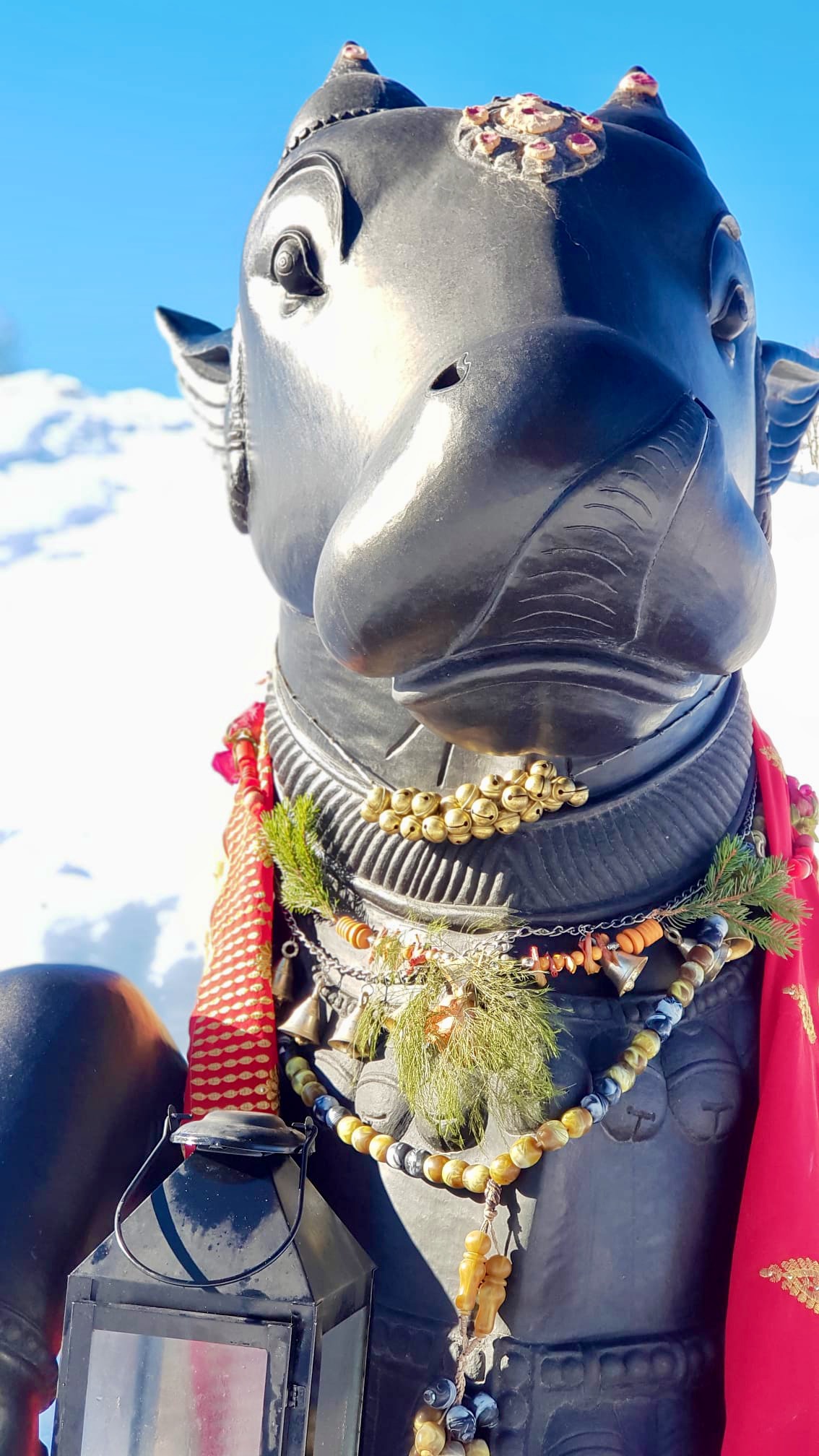